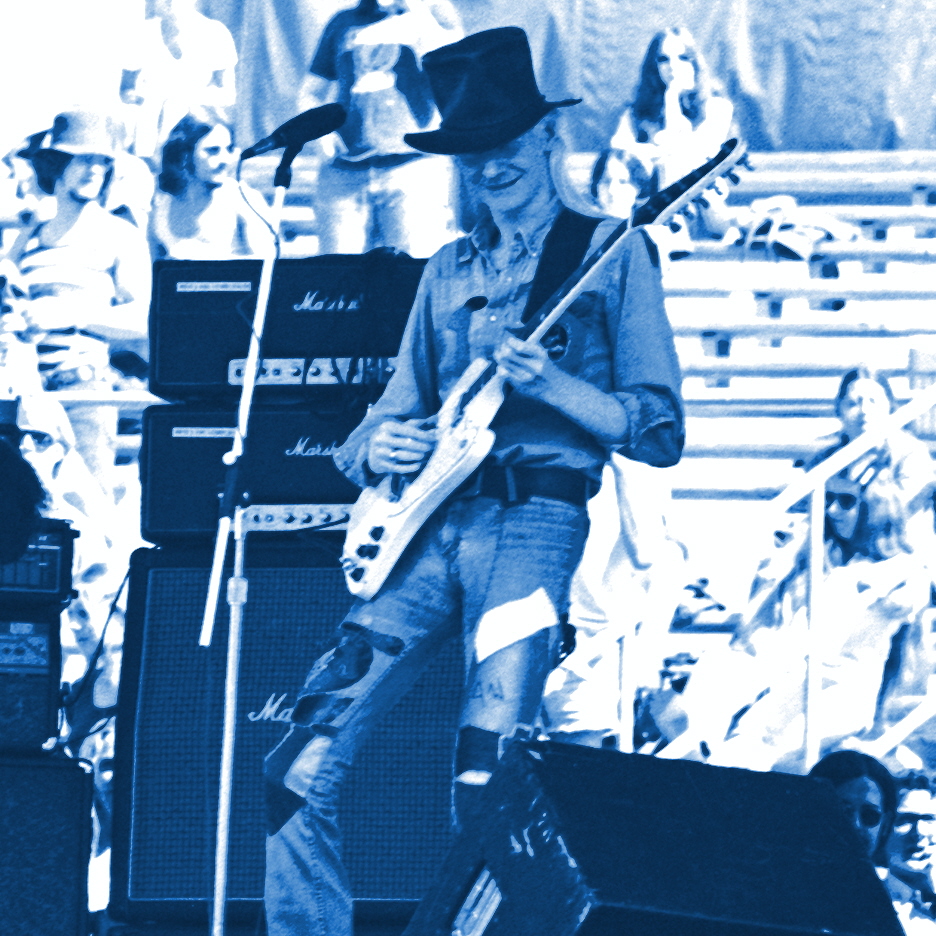 SAN FRANCISCO (KFS) —
Armed with a repertoire of hot licks and a legendary, charismatic personality, a relaxed-but careful Johnny Winter faced a record Winterland crowd and to satisfy both his older, more faithful fans and the newer followers attracted by the success of his younger brother Edgar. Ever since his auspicious debut in the mid-’60s. Winter has remained in name — if not in fact — a prince among mere pretenders. Yet, like Eric Clapton, drugs toppled him from guitar Kingdom’s Mount Olympus, and he has been forced to renegotiate the comeback trail.

“His initial return tour was a major disappointment,” conceded Winter’s manager Steve Paul. “Everything was sloppy, and Johnny was trapped into playing everyone’s favorite numbers instead of doing what he wanted to do.” This time around, however. Winter seemed able to follow his musical mind wherever it led, discarding once-automatic renditions of older songs to dwell more on new material.

Backed by Randy Jo Hobbs on bass, Floyd Radford on rhythm lead guitar and Richard Hughes on drums, Winter opened the set with a spirited version of “Rock & Roll People,” penned for him by John Lennon. Wisely, Winter immediately allowed Radford the freedom to play extended leads, which in turn forced the albino axe man to maintain a similarly excellent level throughout song and set and provided an ecstatic crowd with more than enough calisthenics to satisfy their hunger.

Continuing with sons from the new John Dawson Winter III album (Blue Sky PZ 33292), the band followed Rick Derringer’s “Rock With me” with “Stranger,” a slower, original number; that changed the performance’s pace while permitting Winter and Radford to stretch out through the song’s fluidity. After a blazing “Bonie Maronie,” the band launched into three extended blues-rock jams which dragged a bit even as they showcased Winter’s slide work and the group members’ individual talents. However, they recovered with’ ‘Johnnie B. Goode.” a rouser that inspired some agitated fans to urge Winter on by repeatedly echoing the refrain — “Go, go. go Johnnie go!”

Winter came back for two much-demanded encores (lighted matches, thunderous applause and the usual howling). One of which was the Stones’ “Jumping Jack Flash.” “Rock & Roll Hootchie Coo” was conspicuously absent, but there were few calls for the tune.

Backstage after the show, Winter half-complained that despite the crowd’s favorable reaction, he wasn’t totally satisfied with the evening’s performance. “I’d say the show rated about seven on a scale of 10,” he judged. “Yesterday when we opened the tour in Sacramento, it was a 12. Something was missing, but you can bet I’ll find out what and play my fingers off tomorrow in Long Beach.” Maybe an opening night’s adrenalin rush was the elusive quality, but if Winter thought the show was lacking I’d be interested in hearing what he considered better.