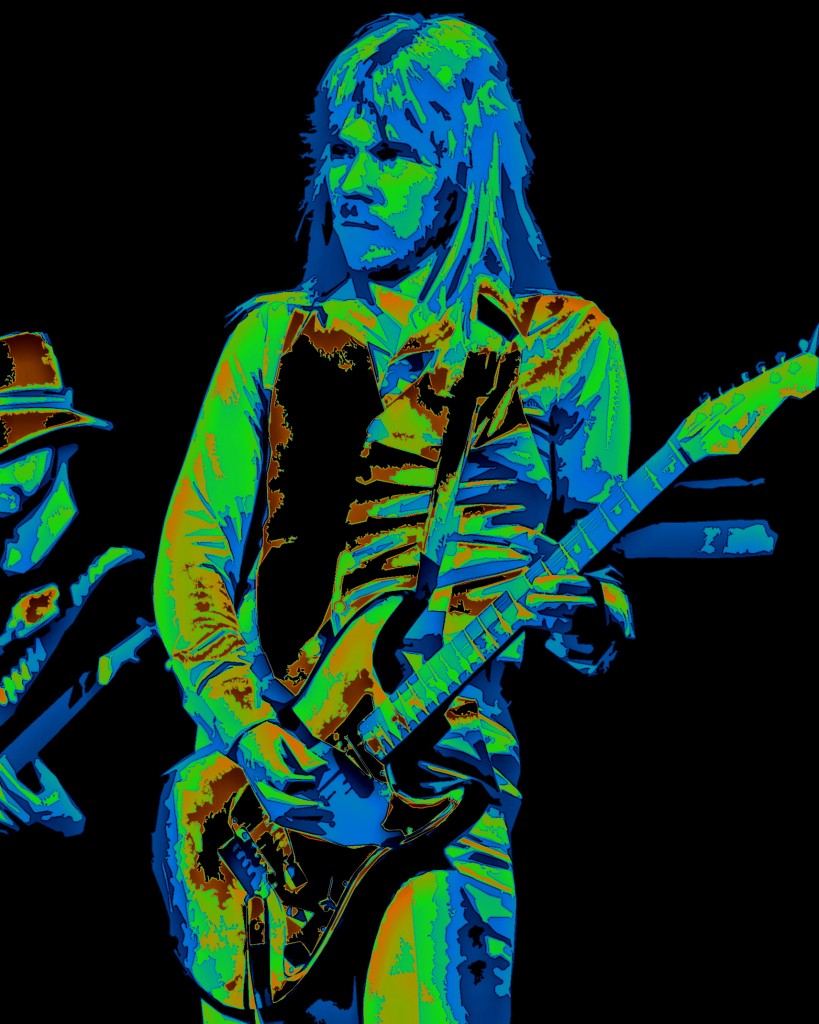 CLICK THE LINKS BELOW FOR STYX PHOTOS AND MORE:
STYX 1977 GRAND ILLUSION TOUR PHOTOS BY BEN UPHAM
AND
PURCHASE THE “CYCLORAMA” CD

#1-
“STYX HAS BEEN AROUND AWHILE BUT STILL HAVE THE ENERGY TO GET UP AND GO”
BY DAVID YONKE
THE SALINA JOURNAL
SALINA, KANSAS
MARCH 19, 2003

Progressive rock band Styx is like a finely tuned race car that’s been around the track a few times but still has plenty of get-up-and-go, says the group’s guitarist-singer Tommy Shaw.

“When you play a lot of shows, you’re bound to get really good and tight,” he says. “We’re constantly tearing it apart, tweaking on it every night, like a race car. I think Styx 2003 is the best that the band has ever been, and who would’ve thought?”

Even Shaw is shocked by Styx’s longevity. The group traces its roots to 1964, when it played the Chicago nightclub scene as the Trade Winds. It changed its name to Styx in 1972 and Shaw Joined the band in 1975, when the group first hit the Top 10 with the soaring power ballad “Lady.”

From 1977 to 1984, every album the band released sold between 1 million and 3 million, spawning such radio hits as “Come Sail Away,” “Fooling Yourself (the Angry Young Man),” “The Best of Times” and “Babe.”

Like the mythological river that Styx is named after, however, the band’s path has been one of many twists and turns. Styx’s original drummer, John Panozzo, died of a gastrointestinal hemorrhage in 1996, and in 1999 the group made the decision to replace original keyboardist Dennis DeYoung, who suffers from the energy-sapping disease Epstein-Barr Syndrome and was unable to endure the rigors of lengthy concert tours.
“In 1999, we were faced with either hanging it up, or taking some drastic measures and going forward,” Shaw says. “We bit the bullet and made the very difficult decision to carry on without Dennis.”

The lineup now features Shaw, original guitarist James Young, Glen Burtnick on bass, Lawrence Gowan on keyboards/vocals and Todd Sucherman on drums. Chuck Panazzo, the original bassist and brother of the late drummer, recorded two songs with Styx on its latest CD, but is not joining them on tour.
Styx recently released its 22nd album, “Cyclorama,” with an eye-popping cover by graphic design guru Storm Thorgerson. Shaw says the band was amazed and encouraged by the creative freedom it received from Tom Lipsky, president of CMC/Sanctuary Records. “James Young and I met with him a year or two ago and he said, ‘Assume there is no radio support. Don’t worry about hit singles. Make the record for yourselves and your fans.’ JY and I thought, ‘Did we hear this right? Did we hear what we thought we heard from the president of the record label?'”

That kind of support “took the shackles off,” Shaw says. “It freed us from the past. And the first song we did was ‘One with Everything,’ which is one of the most progressive Styx songs ever done. It’s about seven minutes long, goes through three different time changes, and every type of Styx style.” Ironically, Shaw says, the new disc is getting more interest from radio than anything Styx produced in years.

Bands that have been around for 30 years just don’t break new ground. It doesn’t happen. If a band has had the mixture of talent and luck to still be making music 30 years after their first release, there is rarely much interest in breaking new ground, as their hits and fan favorites will easily fill a two hour concert.
Nobody told Styx.

Cyclorama is perhaps the best Styx album in the history of the band. At the very least it is the best recording proffered by Styx since The Grand Illusion/Pieces of Eight. For the first time in 25 years this is a Styx album through and through, from the opening rumble of Do Things My Way to the last strains of “Life of a Stranger” (a much too short hidden track at the end of the disc.
This is the first Styx album without founding member Dennis DeYoung. This may turn off some long-time fans, but the infusion of Lawrence Gowan and the re-infusion of Glen Burtnick have revived the energy and mojo that caused Rolling Stone magazine readers to crown Styx “the Best Band in the World” in 1981.
The album opens with “Do Things My Way”, a rousing Tommy Shaw rocker that evokes classic Styx sounds while sounding cool enough to play on any Modern Rock station you could name. “Waiting For Our Time” (the first single, again sung by Shaw) follows and brings Styx clearly into the twenty-first century, but will please Styx fans old and new. “Fields of the Brave” is the first offering on the album from new member Larry Gowan, and evokes the magic that Dennis brought to the early days of Styx. This may well be the most poignant and beautiful song Gowan has written in his long career, and is destined to be a classic.

Cyclorama takes an interesting turn with track four, “Bourgeois Pig”, which is something of a soliloquy with Billy Bob Thornton on lead vocals, and leads into “Kiss Your Ass Goodbye”. Glen Burtnick sings his way into Modern Rock/College Radio heaven, while still retaining Styx signatures all over it. Next is James Young on vocals for “These Are The Times”, an amazing song written about JY’s brother. Styx then slows it down a little with a love song, “Yes I Can”. Tommy Shaw and Glen Burtnick duet on a beautiful love song that will make those missing DeYoung melt. Next is “More Love For the Money”, the second of two offerings from Lawrence Gowan, evoking thoughts of classic Styx and Queen all at once.

One more near-ballad, “Together” picks up the pace a bit with Tommy at the microphone, leading into an amazing arrangement of the Styx classic “Fooling Yourself”, with background vocals by none other than the legendary Brian Wilson. This beautifully eerie trip back in time results into a slingshot into today with Captain America, where James Young proves that he is woefully under-represented in the vocal department. This song could be a classic in today’s international environment, and could easily be a song of inspiration for US troops overseas. The song reprises some of the musical base of “Miss America” and takes the deep cynicism of that earlier offering and turns into a message of hope for the future.

Moving into the final phase of the album, Styx continues to wow you with “Killing the Thing That You Love”. This Glen Burtnick vocal may well be the most controversial song on the album for long time Styx fans. Some have pointed to lyrical coincidences that make it sound as if it is directed at former member Dennis DeYoung, but the song was written in 1994 by Burtnick, who was not even a member of the band at the time. Regardless of who or what it was written about, it’s an amazing song, worthy of the Styx name. Next up is a new Prog classic, “One With Everything”. This is the song that old time Styx fans have been waiting for since The Grand Illusion. It rocks hard, and in between it slips into dreamy musical landscapes that are far beyond the ability and reach of the mere-mortal bands regularly “scene” on MTV, VH-1, and MuchMusic. The last listed track, Genki Desu Ka, plays over a drum loop developed by Styx drummer Todd Sucherman. The title means “how do you feel” in Japanese. It’s a feel good meditation in much the same vein as the closing of Pieces of Eight, “Aku-Aku”.

I forgot to mention the background vocalists on “Kiss Your Ass Goodbye”. They would be none other than Tenacious D. They also contribute a short skit in which they talk their way into getting onto the album, involving Tommy Shaw. It’s good for a chuckle, and is somewhat reminiscent of old Cheech and Chong. And finally, “The Chosen One” (sic) is an untitled, unlisted track at the end that might serve as a dedication to the heroes of 9-11. This entirely vocal snippet is much too short, and is a beautiful elegy to leave on the palates of Styx fans, as it suggests that Cyclorama is not a one-time spike, but perhaps the beginning of an entirely exciting and musically fulfilling in the life of Styx.
Whether you’ve loved Styx from days of old, or hated them with a passion, or never heard of them at all, this is an album that is worth your careful attention. In this day and age of corporate radio and mass-production rock music, Cyclorama is an amazingly organic aural experience.
Sit back and relax. Styx is about to blow you away.

#3-
“The Carrot Hath Been Delivered – Not Dangled”!!
March 13, 2003
By “psychosy” (Monroe, MI)
Can STYX survive without Dennis DeYoung? That is the question.
The answer to that is an emphatic YES THEY CAN!!
“Cyclorama” returns STYX to their heavy metal/prog rock roots and it rocks hard! From the first track to the last, the CD is jammed packed with their strongest and best studio recording they’ve done since “Paradise Theater”. “DO THINGS MY WAY” is a strong opener that’s radio friendly. Has a sound somewhat akin to a Damn Yankees tune but a chorus that’ll remind [] Styx fans of such vintage albums as “Equinox” or “Man Of Miracles”. WAITING FOR OUR TIME is an acoustic pop rock style tune sporting a sound simular to something off of “Crystal Ball” but a powerful “Pieces Of Eight” style harmonized rock chorus and deep Creed-like chords keeps up the pace. “FIELDS OF THE BRAVE” and “MORE LOVE FOR THE MONEY” are the two tunes sang by Gowan and they are amazing – think The Beatles meets Queen!!Glen Burtnik’s “KISS YOUR ASS GOODBYE” comes right of left field blazing like a Blink 182 inspired monster. However, the real gems on Cyclorama are YES I CAN which has hit single written all over it, the prog rock magnum opus ONE WITH EVERYTHING, and the 7 minute “Grand Illusion-esque” head-swirler entitled “THESE ARE THE TIMES” sung by JY, which is an oddity considering that except for “Snowblind”, JY’s songs seldomly stand out and define an overall Styx CD.
Overall, “Cyclorama” returns STYX to the rocking band they once were yet it’s powerful enough to make them relevant today if only they get the attention and exposure they truly deserve. It’s a CD that proves a truth that some might argue with or find very hard to accept – STYX can indeed survive without Dennis DeYoung. In fact, I’d go so far as to say his departure helped the remaining members come together and returned STYX to what attracted fans long ago – hard-hitting, fist pumping, ROCK AND ROLL. What we have here is an unexpected treasure. The energy and vigor explode, and their creativity as a whole unit make “Cyclorama” – when compared against the last few releases sporting all new material (Brave New World, Edge Of The Century, and Kilroy Was Here) – beats them all hands down.
A timeless classic in the making!

CLICK THE LINKS BELOW FOR STYX PHOTOS AND MORE:
STYX PHOTOS FROM THE 1977 GRAND ILLUSION TOUR BY BEN UPHAM
AND
PURCHASE STYX- “CYCLORAMA” CD 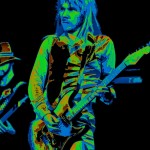